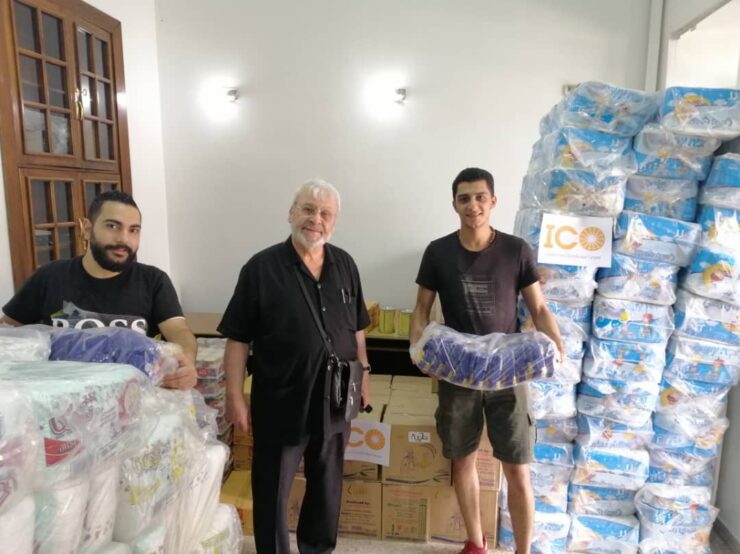 Unfortunately, the Corona pandemic has not spared Syria. After the long years of war, the health system is in a deplorable condition, many hospitals have been destroyed or damaged, and there is a lack of doctors, nursing staff, devices and medicines. Inflation, unemployment and poverty are wearing down those who have remained in Syria, most of them because they did not have the financial means to flee, but some because they did not have the heart to abandon the poorest in society.

The foundation “Korbgemeinschaft” has continuously adjusted its 2020 projects to the changing needs and developments. Instead of renovating kindergartens and schools and organizing the longed-for summer camps for children and adolescents, the help most urgently required at the moment is the provision of emergency packages to fight hunger and to provide essential medicines.

The fact that the “Bakery of Grace” in Maaruneh is now in operation to fight hunger day by day is an act of Divine providence and grace.

The letters and appeals for donations and the applications for funding the bakery machines were successfully continued by the foundation in “home office” mode. At the beginning of July, the funds sufficed to pay the machines and equipment. Right after payment, they were transported from Lebanon to Syria on two huge trucks.

Immediately thereafter, crossing the Lebanese-Syrian border became even more difficult due to severe Corona containment measures. The Lebanese engineering specialist, who had intended to personally supervise the installation of the machines and the test run of the production line, decided to monitor the technical coordination from Lebanon, via an Internet connection.

On August 4th, the first flatbreads left the conveyor belt in a successful trial run of the production line. This was the starting point for submitting the applications for state-subsidized flour and energy.