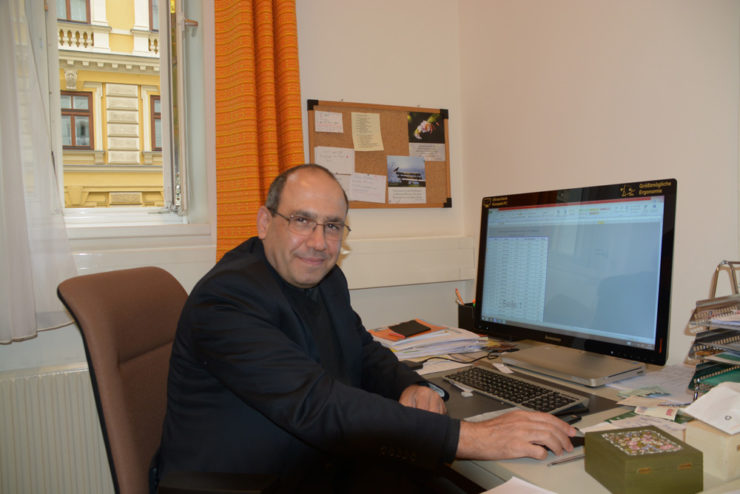 Father Hanna Ghoneim, born in Damascus on May 10, 1966, is a Melkite priest ordained in the Patriarchate Cathedral of Damascus on October 11, 1996. Since 2004, he has been in charge of the Melkite community (a church from the Orient united with Rome), which belongs to the Ordinariate of Believers of the Byzantine Rite in Austria. After completing his doctorate at the theological faculty of the University of Vienna in 2010, he returned to Syria in June 2011. In the summer of 2012 he came back to Vienna to spend his holidays with the Melkite community founded by him. During that time, his parish in Harasta (8 km east of Damascus) was conquered by Islamist fighters, and all Christians had to flee to areas which were under government control. This caused Father Ghoneim to stay in Vienna. From here he started to organize help for the people of his community in Syria, who had fled. Realizing how generously and helpfully the people in Austria and Germany responded to the plight of the people of Syria, he expanded the range of assistance to other needy Christian communities – especially in Homs and Aleppo. In order to add a more public character to these aid projects, statutes were drawn up and Cardinal Christoph Schönborn (Archdiocese of Vienna) established the Foundation “Korbgemeinschaft-Hilfe für Syrien” (Basket Community – Help for Syria) in April 2016. This now constitutes the legal entity for dealing with public institutions.

The Foundation follows the call of Christ, who looks at the bitter need of the people in Syria and asks us today, “They need not depart; give ye them to eat!” (Mt 14:16). With the help of many socially engaged friends and aid organizations, the Foundation endeavors to start aid projects for the suffering people in Syria, so that they were initially able to survive the difficult situation of the war and can now receive encouragement and support in their efforts to rebuild the country. The Foundation cooperates with many priests and people in religious orders in Syria in order to identify the specific needs of the people and to bring help to where it is most needed.

Father Hannah Ghoneim believes that Christians should, if possible, stay in their home country and fulfill their mandate in the spirit of Christ for the suffering people in Syria. They can do so only with the assistance and generosity of fellow believers, their brothers and sisters in faith, and those who feel compassion for the war-torn people in Syria and who are ready to help.