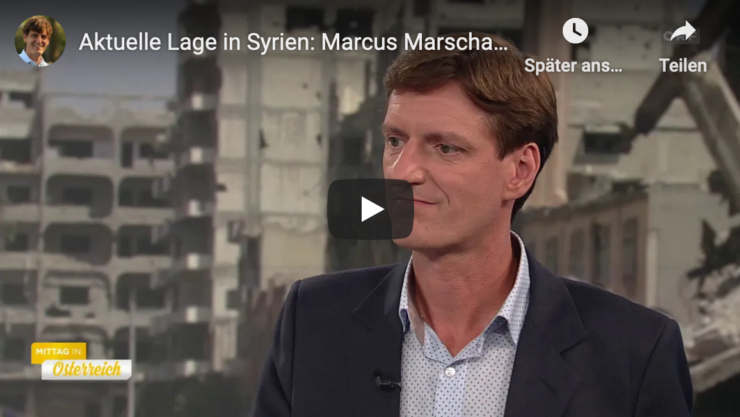 Marcus Marschalek, known to many Austrians from his work in the ORF editorial team for “Orientation”, accompanied Fr. Hanna Ghoneim to Syria in order to gather personal impressions of the local situation. Please listen and read for yourself:

Report by Marcus Marschalek (translated from the German original version):

Kilometers of destructions in Homs. Some of the most violent clashes between rebels and the Syrian army took  place here. Today, millions of people in Syria are homeless and fleeing. The priest Hanna Ghoneim tries to help. With donations from Austria, he visits severely affected areas. Hayat Awad works for the Ministry of Communications and steers us through the ruins of the city. She shows us where people live in the rubbles and need help desperately. The memories of the clashes are alive. Awad lost her son in the war. But diplomacy and military intervention are not the only things required. Fr. Ghoneim tries to create jobs and convey hope in long-term projects. In the small Christian village of Ma‘arouneh, a bakery with an attached restaurant is planned with Austrian help. The construction pit is currently being excavated.

Report by the Catholic Workers’ Movement in Freising (translated from the German original version):

A large portion of the Syrian population is living below the poverty line because of the war and the sanctions. For many of them, even access to daily bread is very difficult. Fr. Hanna Ghoneim, a priest of the Melkite Church in Syria, tries to remedy the situation through his selfless and tireless efforts. Under his guidance, the Christian foundation “Korbgemeinschaft” is building a regional bakery not far from the Christian village of Ma’arouneh. This bakery is intended to provide the village and the region with affordable bread, while at the same time creating jobs. Let’s join to support Fr. Hanna in this effort.