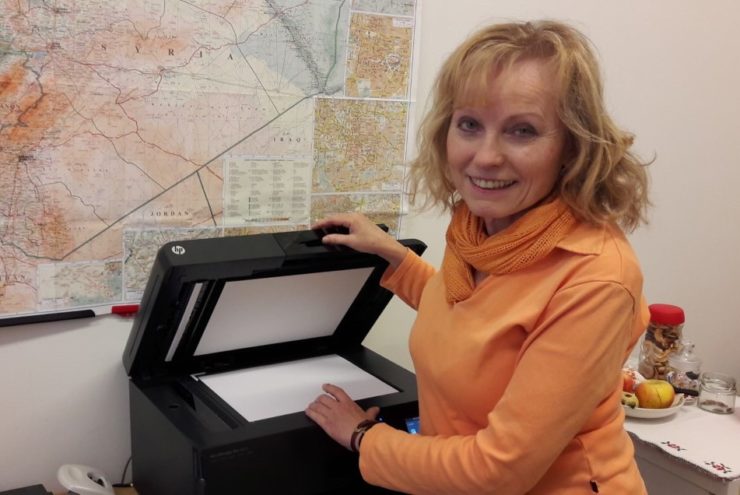 The Foundation “Korbgemeinschaft  – Hilfe für Syrien” attracted my attention in early 2017, while I was still active in my professional career.   My training background is in translation and interpretation and I have more than two and a half decades of working experience in the international diplomatic environment. This is why my contribution to the foundation consists mainly in linguistic and administrative support.

I greatly enjoy the community of friends and meeting people. My motivation is also based on a deep gratitude for the privilege of having reached my retirement age in a fit and healthy condition. I want to spend my time in a positive, joyful, life-affirming and meaningful way.  To me, the targeted help for victims of a war – fuelled by a variety of geopolitical interests – that still hasn’t come to its desperately hoped-for end, seems to be an urgent necessity. Not in the form of alms and half-hearted alibi actions, but much rather as genuine help to enable people to eventually help themselves. This supports needs to be provided at eye level, respecting the dignity and the pride of the recipients.

I think that those people in Syria who had to stay despite the war, because they simply couldn’t afford the fare to another country need our help most desperately.  Those compassionate individuals who have remained in spite of existing means, because they could not bear the thought of abandoning the children, the elderly, the sick, the handicapped, the seriously injured, and the chronically ill are, in my opinion, the true heroes of their country. These brave people now urgently need our support to keep the Christian charity spirit alive despite difficulties and to gradually rebuild an infrastructure in order to prevent the weakened country from losing even more desperately needed experts through emigration. Without an income, a livelihood and a chance of improvement, desperate people often see no alternative to leaving their country.

One important factor that shouldn’t go unmentioned in terms of my motivation: I am one of the natural sisters of Sr. Walburga, who – jointly with Father Hanna – incorporates the solid foundation, the strong backbone and the vital organs, above all the merciful Christian heart, of the Foundation.